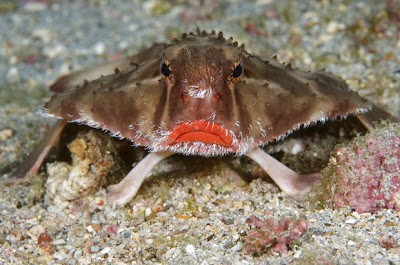 By request, today I present you with the rosy-lipped batfish (scientific name: ogcocephalus porrectus). Found in the waters of Cocos Island off the coast of Costa Rica, this odd looking fish looks like it is ready for its "maybe it's Maybelline" close-up for smear-proof lipstick, but it definitely needs a shave. 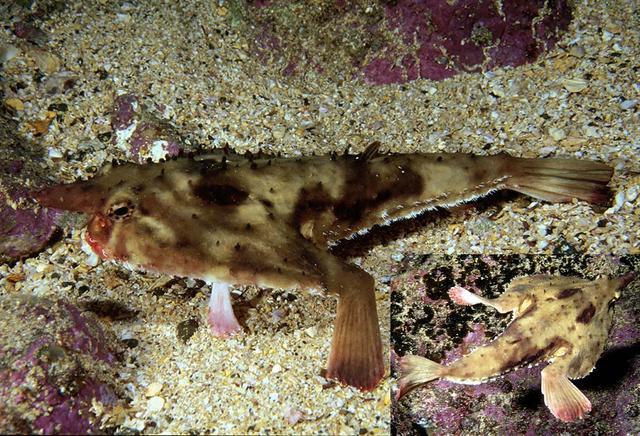 This bottom-dwelling fish can be found at depths ranging from 90 to 450 feet. Seen from above, it has been said to resemble more of a "frog fish roadkill" than a bat. Full-grown it is about the size of your open hand, nearly flat on top, and spreads its pectoral fins out to its sides. A slow and clumsy character, the rosy-lipped batfish uses its pectoral and pelvic fins like legs to crawl on the ocean floor rather than swim. Ichthyologist and batfish expert John McCosker says they prefer to “sit upright, like old tail-dragging airplanes.” 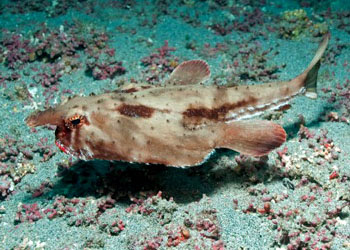 It has a leathery skin that feels like sand paper and large spiny knobs covering its back. To add to its bizarre appearance, this fish has a unicorn-like horn protruding from its head. According to McCosker, this rostrum (a Latin word meaning "beak") is "firm - sort of like chicken gristle, and it protects a thin, retractable appendage that the batfish deploys to lure small edible fishes".

Why this drag-queen-looking fish looks like it does, I don't know if anyone really knows. I didn't find any answers in my research. But does the rosy-lipped batfish remind you of anyone in your family?

Email ThisBlogThis!Share to TwitterShare to FacebookShare to Pinterest
Labels: Reviewed